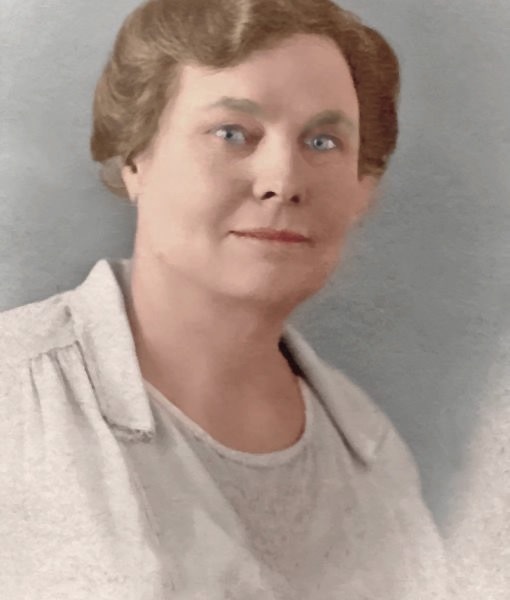 The Last two weeks of Summer S. was filled with hard work. The typing was perhaps the hardest for I couldn’t do that and Syl came home and engrossed so much of Jessies time. So some of it had to wait until afterwards. It was all done beautifully at last. I finished up everything and came out with a credit of 2 in every subject. And a credit of 3 units in all three subjects. The last day July 31 as I was waiting for my P. T. book to be marked, J called at the house. I did not see him. I went directly over to Eilenes and spent the evening. On Monday she came over and we went down to see Mrs. Smith and she bought a piece of poplin to make a dress (Aug. 2)

Aug 4 – J called and I had a pleasant visit. He did not stay long. The little car is in the city for awhile.

Aug 6 – Betty’s Birthday [Mrs Fryer’s daughter] – Bettys 10th birthday. I bought her a scrap book and took it to San Rafael on Sun. had a very fine trip but was disappointed to find when I arrived that they had been sent to Notre Dame in S. F. I had an awful time finding visiting several convents in the mean time and at last I found the place. It was after suppertime and visiting hours. The good Mother Superior waived all rules and let me see my darlings who were overjoyed to see me and so pleased with the scrap book and Aunt Elsies page that I was well repaid for all my strenuous time hunting them up.

Aug 7 – Eilene brought the money for for the dress and some for me.

Aug 10 – I went to Mrs Pfitzers to meet Mrs Milliken and pay her for the silk. All this while I am doing housework and a little sewing for myself. Making over Irenes brown silk dress.

Sat July 14 – Mr and Mrs Mooney and two children came over to see us. We had a pleasant time.

Sun July 15 – J and Syl and I went over to the city and out to the beach. It was cloudy foggy and cold but I enjoyed every moment of it. Frank H [ Hoffman] drove out to the beach and picked us up and drove home past Ingleside and stopped at Smiths for some honey and a short call. Then home leaving J. & Eilene to cook dinner while they took me on to Allies where I had a bite and then we three Allie, Agnes and I went to the California to see a fine film. Then home to Berkeley by the everlasting hills. Received letters from Milo, Carrie and Lolita. They are all well and so this brings me back again to Aug 18, a fine day.

Sep 25 – began $25.00 course in color design under Mr. Ralph Johonnot at the Y.W.C.A. auditorium. Think I shall like it immensely. Tuesday Thurs. Sat. also Miss Sellenders class on fri eve which will make 4 classes a week for 5 weeks.

Met friend J. [Joseph Richardson] who told me a remarkably amazing story of his life and his true relation to Mrs. Fryer who was not his sister at all but his wife forced by cruel circumstances to pass as his sister. I was so dazed by the story that I can hardly grasp it yet. So Lois and Paul are Josephine and Bettys half sister and bro. O cruel world and crueler laws that govern its blundering humans.

Sat Sep 25 – Went to S. F. for the night. Recd letters from Milo and Carrie

Sun Sep 26 – Went to convent to see Josephine and Betty. Took them the Ribbon and manicure set. They were delighted to see me J and E called in for a few min. at the convent. J was there and left before I arrived. The rest went on for a long ride in dad’s machine. I came back to Eilenes and couldn’t get in. Dad M came and crawled in the bath room win. and opened the door for me and then went away. I got dinner for the hungry motorists who arrived about 8 oclock.

Sep 27 — Came back over to Berk by way of Oak. called on Jessie at work and got my bag at St. Marks that I left there sat.  Glad to get it back again. Just unpacked my bags and brought in wash, that J. and Syl did on sun.  Got a letter from Bro Horace.

Oct. All mo. — busy with Johonnots course in color and design. I liked it immensely, and made several good designs, held the final exhibition at the Oakland Auditorium which was well attended and appreciated. Sent mother a birthday card. [Millie COATS PADEN]

Oct 26 – commenced practice teaching at the Lockwood school like it pretty well went over to the city several Sundays to see Josephine and Betty.

Nov 16 – 53 birthday Mrs. Martin gave me a good book and Ella gave me a bottle of toilet water.

Nov 14 – Eilene and Frank drove over and bought a dress form from Mrs.Milliken and took it home in the car  we had a fine ride down after it.

April 10 – Josephines 12 birthday – I went to Notre Dame Convent and took her a birthday cake and Fairy Story book “Laboulacs” J. came in his new car. I dident see it. Spent the afternoon at the convent and then went to Eilenes. Met Dewey and Allie who took me to the Ferry. Dewey took me to the end of the wharf to see the boat Ashbury Park that runs between S.F and Vallejo. And said it came from N. York City on its own power. Jessie and Syl went to Smiths to a dinner.

(Began Teachers Training course Sep 2 1919 at Oak. High school at 12 and Jefferson st. My first teacher was Mr Lance Abernathy who taught theory and methods also textiles. I attended every Tuesday and Friday nights going on the street car from 1534 Bonita Ave Berkeley. I studied color and design under Miss Sellender Miss Jacobsen and Ralph Johonnot. I also attended the summer session of the University of Cal in 1920. I finished with a short course of Oral English under Mr. Jacobs. from Jan 31, 1921 to April 1 1921).

During that time, I put in several months practice teaching 2 days per week at Lockwood school and from Jan to June teaching sewing and remodeling at the Mobilized Women of Berkeley at 10 and University Ave. Berkeley California, in the year 1921.[note: This Bernard Maybeck, architect, designed building still stands and has unique glass blocks set in concrete in a lattice-work pattern & is still standing as of this writing.]

In October I studied Lamp Shade making in San Francisco at the Emporium and The White House, and in Nov 1921 did lamp shades at home for a factory.

The class Alumni gave a dinner at the Hotel Stuart in S.F. which was also the occasion of presenting diplomas. These were later exchanged for more comprehensive diplomas showing the work covered and signed by the university faculty at the graduation exercises of the class of Jan 31 1922

In summer of 1921 I visited my cousin in Los Angeles.

In November 1921 I went to St Helena to nurse in a sanitarium for a few weeks. [ you can read more about this in the Case of the Mysterious Birth Certificate]

Feb 3 1922 – I joined a millinery class. Began work renovating and trimming hats for the Mobilized Women of Berk[eley]

Sat Mar 11 –Worked at M. W. B [Mobilized Women of Berkeley] all day

The above is the last regular entry in the diary. However the page below was from 1913, and it predates the first entry in the dairy which was September 1st 1913. So in a remarkable way we arrive back at the beginning.

1913
Aug 15 Mrs Gussie Halstrom wrote a love letter to my husband which I found in his pocket on Monday the 18. That evening I went to Mrs Reynicks and later the same evening to Mrs Della Mc Vickers. Stayed at the latter place Tuesday, Wednesday and leaving Thursday morning and going to Mrs Lizzie Neumans at 1017 Hawthorne St. Minn .

Recapping the diary begins in 1910 as a business and correspondence ledger and ends in 1922. It both records the mundanities of life as well as historical events and Lulu’s struggles with a failing marriage and supporting her family and then herself.

Lulu married Frank Nov 8, 1989 when she was 21. The fact that she was not married at her mother-in-law’s hotel in Dodge, like his sisters, along with the fact that no family members were witnesses for there marriage lends me to think her family did not approve of her marriage to Frank. Lulu was the eldest of 13 children and perhaps she saw Frank as her ticket out of taking care of her younger siblings and escaping her father’s demands as her vocal teacher. Whatever the case 9 1/2 months after she wed Frank, their first child arrives. In total 8 children are born between 1890 and 1903. As far as I can tell Lulu’s sons and daughters were close and good to their mother. She certainly cared for and worried after them.

After March of 1922 when the diary ends we have scant records of Lulu’s life. In 1923 she was living in Berkeley. In 1924 and 1925 she is living in Oakland and in 1926 & 1927 she is living at 171 Miramar Street in San Francisco. Not sure of the reason to her return to San Francisco. Did she get a teaching job? The City Directories do not reflect her occupation, however she is living independently. On the 9th of July 1927 she marries Karl B Anderson who had been an immigrant from Sweden. In 1928 they appear in the City Directory at 48 Delmar, San Francisco together with his occupation as Foreman at California Stevedore Company, Pier 26 [loading and unloading freight on ships].

I think it would be safe to say thay the dress Lulu is wearing above, was designed and sewn by Lulu. Lulu must have welcomed a return to one of San Francisco’s lovely Victorian houses, just 3 blocks from Golden Gate Park and even less of a distance to Buena Vista Park. And with a Bay Window!

On the 1930 census they have moved to 219 Jules Ave and Karl’s son Carl B is 16 is living with them. I like to think that Lulu finally found happiness with a man who loved her as she deserved. She moved again in 1930 from Ingleside District of San Francisco back to the Inner Sunset, I am sure it would have been a move that pleased her. 1715 18th Ave is about 3 miles north of Jules Ave and about 5 blocks from her beloved Golden Gate Park. On the 23 of October 1930 at 2:50 in the afternoon she died at home of chronic interstitial nephritis, chronic myocarditis and general anasarca [fluid retention, edema]. Her physician certified she had the chronic conditions otherwise known as kidney and heart disease for 6 years. We know she had been suffering from various ailments including psoriasis for many years before that. She was a few weeks shy of her 68th birthday. She is laid to rest at Cypress Lawn Cemetery in Colma, California. She was the mother of eight children and only the last predeceased her. She was a devoted mother and grandmother, avid reader, seamstress, teacher and above all else, a fine Soprano who found solace in song.

Dear Readers I hope you have enjoyed Lulu’s diary as much as I have. There may be a couple of more chapters although they will not be of her writing. And again a heartfelt thanks to my cousin Dale Mead for his permission to share Lulu’s diary and to my cousin Malia Hammerstrom for her help in the transcribing.