SNIPPTY DO DA! WHEATON GROUP B

Yes things have been quiet here for quite some time. Although eventually I will be posting more about my trip.

A few days ago I was alerted by Rich Roca (of R-U152) of a new match that is in our FGC22501 cluster, below L2. Our WHEATON Group B has a genetic distance GD of 0 to -7, this new TRIPP match is our closest match to date -16 . Let me recoup in the order of when we got the matches.

This diagram shows our very own SNP progression. Each box shows all those sharing the SNPs. As we move downward, the pool shrinks and the time frame gets closer to the present. 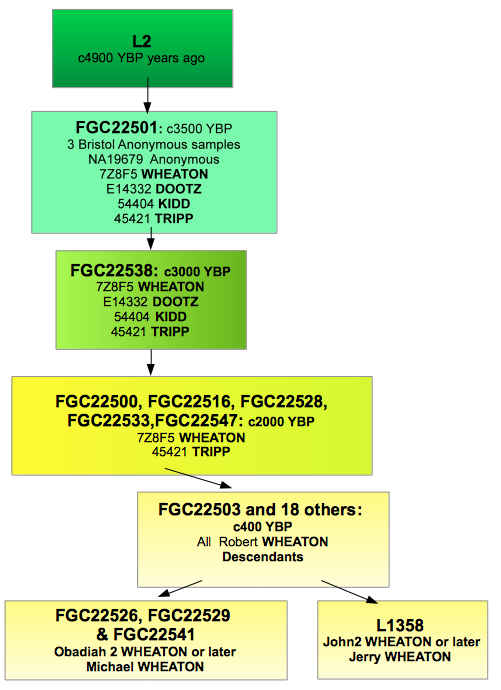 So at first this had me scratching my head— TRIPP has some of its highest concentrations in Somerset Co, England but this branch is from Lincolnshire and appears in the records as early as 1500’s—we do not know if there is any relation between the TRIPPS in Somerset & Lincolnshire.

There is some Lincolnshire connections to Flanders. First are Flemish soldiers that were stationed near Hadrian’s Wall in the years 90-120 and up until the 4th century. There are also Roman soldiers that may have passed through this area of the Rhine and there is STILL the possibility of earlier Celtic immigration into Britain. L2 is though to have originated about 4900 years ago in the Alpine regions of Northern Italy where it is found in its highest concentrations today (10-12%) L2 was found to be about 5% of those in the 1000 Genomes Brabant (Belgium) Project. And falls to about 2% in Britain. The following map shows the Possible path from the east to the Bell Beaker cultures which may have been where L2 developed. Then for our branch moving up from northern Italy into the Rhine region and finally North Belgium and across to Britain. Still not clear of that would have been in the Celtic era Belgae, Roman or Flemish immigration. It does appear that the closest matches are in the are from Cologne into the north Netherlands

I am still hoping that a few of you decide to do the YSEQ panel available for available for $231 here http://www.yseq.net/product_info.php?products_id=10796 This would be most valuable for those not descended from Robert WHEATON.

I have requested primers for FGC22501 and FGC22538 in hopes that at $17.50 each some other surnames may decide to test. Especially interested in some in the Netherlands project.

2 Comments on “SNIPPTY DO DA! WHEATON GROUP B”